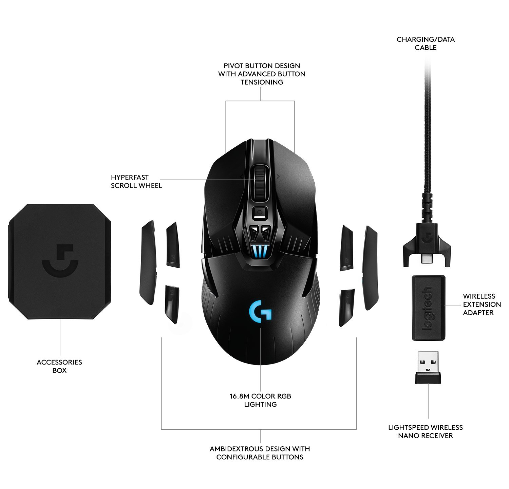 In this post, we are going to talk about, Logitech G903 Wireless Gaming Mouse. This is definitely one of my favorite mice. Logitech is a very popular brand among gamers because they've been in the market for more than a decade and they always provide us with the best products available in their line. In this post, we will also talk about the Logitech G903 wireless gaming mouse.

In this post, we are going to talk about, Logitech G903 Wireless Gaming Mouse. This is definitely one of my favorite mice. Logitech is a very popular brand among gamers because they’ve been in the market for more than a decade and they always provide us with the best products available in their line. In this post, we will also talk about the Logitech G903 wireless gaming mouse.

We all know how annoying cables can be on a gaming mouse, but we also know that if we decide to ditch the wire we’ll have to deal with the input lag and latency. But this is a mouse that gets rid of the cable without sacrificing any input lag or latency.

Logitech managed to create the best wireless mouse there is for gaming with stunning capabilities and an instantaneous response time this Mouse deserves to be called with the best Wireless Gaming Mouse in 2019.

Logitech G903 wireless gaming mouse is an ambidextrous mouse. This means you can use the mouse even if you’re left-handed this is something rare on gaming mice nowadays. So a big like goes to Logitech for doing that.

Ambidextrous mice usually are not comfortable since they have to design them to fit left and right-handed users. However Logitech managed to pull off a design that was able to provide great comfort for both the G903. Comes with up to 11 keys depending on how you set it up they did that to let gamers set up the mouse for either their left or right hand. You can even make it have full side buttons if you love having a lot of buttons on your mouse.

But I think this is a little bit overkill there are basic buttons to adjust the gene IO three, DPI, and switch between a smooth or step action on its wheel plus the usual left and right controls.

What I found to be very useful about this mouse is that it lets you adjust the mouse’s wheel action you can use the resistance-free mode to scroll through web pages faster and you can switch back when you’re gaming or doing something else which doesn’t require scrolling.

Now let’s move into the most important part of the wireless performance if you’re using the G903 as a
normal wireless mouse you use the same USB dongle, which Logitech is used on its other wireless devices for a few years now. If on the other hand, you’re using the Logitech G903 with PowerPlay mat the mouse pad itself acts as your wireless receiver.

The performance is great in both cases and I can confidently say that you can easily compare this Mouse to a wired mouse and won’t notice any difference in polling rate latency or response time. It’s pretty much indistinguishable from any wired gaming mouse.

One of the most annoying things about wireless mice is that you have to charge them very often, you won’t have that problem with the Logitech G903 wireless gaming mouse, because Logitech claims that the battery life can last for up to 30 hours depending on how you use it.

Now it’s time to talk about Logitech G903, newest feature is that it comes with the ability to wirelessly charge through a specialized mouse pad called the Logitech PowerPlay mat. The mat essentially creates an electromagnetic resonance charging field, which the mouse absorbs through a Power Core module that you can attach to the bottom of the mouse. This means that the mouse itself can pull enough electricity that the mouse can keep on going without you having to charge it.

It can even fully charge the mouse with battery in about 14 hours this is great news for us gamers. One more thing about this gaming mouse is that it is seamless with Logitech gaming software.

Everything is OK, but it is expensive.
So now, let’s talk about its specifications.